June 28 in What's on in Scotland by nichola 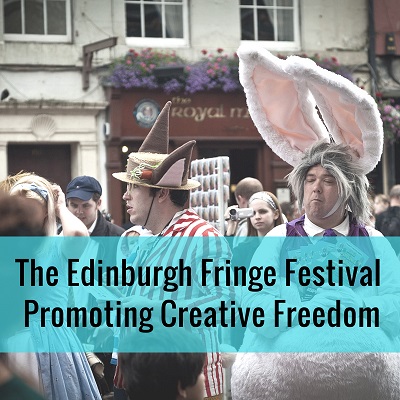 August in Edinburgh is a special time, especially for those who make the journey to the city to be part of the spectacle that is the Edinburgh Fringe Festival.
Billing itself as the “single biggest celebration of arts and culture on the planet”, last year the 25-day festival featured 53,232 performances of nearly 3,400 shows in 300 venues.

1947, the start of what we know as the Edinburgh Fringe Festival

The International Edinburgh Festival was held in the city just after the way and eight local theatre companies decided to take advantage of the thronging crowds by giving performances in smaller venues.

One of these theatre companies performed a version of the play Everyman, a play that mentions ‘the fringe’ several times hence say fans why the festival is known as The Fringe, at Dunfermline Abbey, 20 miles north of the city.

Not recognised as the first Edinburgh Fringe until some years later, this inaugural event gave rise to traditions that remain true today – the lack of invitation to perform and the use of unlikely venues.

Bigger than ever, but still as vibrant, the Edinburgh Fringe festival still retains its principle of it not being an invite-only performance festival.

Backed by its organising body, the festival offers year-round advice to performers who wish to bring their creative expression to the festival.

Hence, people who have never performed in public before can share a stage with some of our best-known performers.

But if you think this sounds like a recipe for chaos, you’d be wrong! The festival organising committee is responsible for putting together a programme, a mammoth task considering the number of people performing, the varied talent and performances on offer, as well as the many, many venues used throughout the three-week festival.

As a festival, the Fringe must surely be the only real example of a festival that has truly morphed, changed and responded to changes in society.

For example, although it is an open access festival, top shows are still only £10 a seat although most are between £5 and £7. However, there is a mixture of shows and performances, some of which are completely free and others are donations after the show has finished.

But it is a festival that has, from time to time, courted controversy. Performances are uncensored thus, you never really know what will happen until you get there.

There have been problems when performers have contravened what some see as common decency, or when sexuality or religious topics have been discussed in a way that some found offensive.

But that said, whilst the festival has never gone out of its way to be controversial, it insists that creative freedoms and open access remain its mantras.

How Promotional Models Scotland can help?

This year, the festival runs from 3rd to 27th August and with a full list of shows already released, the Edinburgh Fringe Festival 2018 promises to be an amazing event, as always!

Promotional Models Scotland is proud to support performers and exhibitors at the Edinburgh Fringe, why not give us a call on 0844 800 0071 to find out more?

GET IN TOUCH
This entry was posted in What's on in Scotland. Bookmark the permalink.